January 4th 2016 dawned cold and sunny. I decided to head to a local body of water to do some early season ice fishing. I had no idea of the horror that waited for me in the shallows!

I had heard reports that some vicious white, and yellow perch had been attacking children who waded in the shallows in the summer time, and I knew it was up to me to protect them.

Although I knew the odds were in favor of me losing my life in the frigid waters, I set aside my fears and ventured on to the ice that was less than three inches thick, in waters that were well over thirteen inches deep. I would not have been surprised to learn that I was walking above pockets that were as much as THIRTY SIX INCHES DEEP!

I set my traps close to shore in below freezing temperatures, with a strong wind in my face. 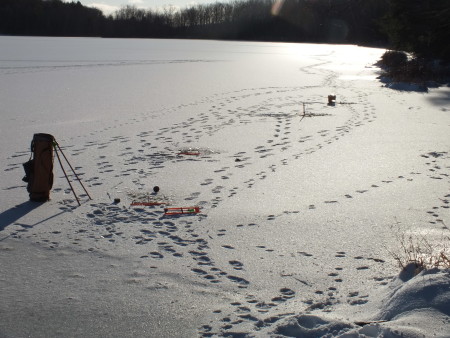 I wont lie, I was beginning to regret getting out of my warm bed! But, I had asked my wife to drop me off, and like it or not, I was stuck out there until she came back to pick me up around noon time.

I suffered miserably for somewhere between ten, and fifteen minutes with no sign of life from the shallows when the first flag popped up.

Knowing that people live in fear all summer long of the monsters that cruise this lake, I was anxious to get to my trap to haul in what I was sure would be a deadly yellow perch, or maybe even a white perch, so I wasn’t paying attention to how I was getting onto the ice, and plunged through the ice at the edge of the lake!

Before I knew what was happening, my foot had sunk almost to the ankle of my shin high waterproof boots, thankfully I managed to get on a bit firmer ice without getting my foot wet.

I got to my trap, and discovered that whatever had attacked my bait had taken nearly two feet of line. I slowly pulled in the slack line… Suddenly I felt a tug, that might have dislocated the shoulder of some one not as experienced as I was.

I expertly pulled back, setting the hook, and realized that something much larger than a perch was on the line. I feared it might be a bass, or worse… a pickerel!

This fish and I fought for nearly a few moments. Fear forced the blood through my veins, so that I could hear my pulse banging in my ears. The battle was so intense that I barely felt the icy sting of the cold water dripping off the heavy ice fishing line. Once or twice, I felt as though the mighty fish would pull me through the ice as we were locked in a life or death, winner take all struggle.

A moment later, I saw the flash of a white belly scrape along the jagged hole I had made in the ice with a steel bar. This was most certainly not a bass!

The fish, having shown itself made a mighty dive to the bottom nearly two feet below me, and I let the line play out, but as soon as the great fish reached the bottom, it darted suddenly to the left, and the line held fast on a sharp point of ice, and the fish jerked free.  It was gone!

Knowing the fish had tasted blood, I had hoped it would be angry to have lost what should have been an easy meal. I worked quickly to wrap the nearly 4 feet of played out line back onto the spool, and get the flag reset back on the trap.

My fingers were now starting to feel the cold since the adrenaline of the battle wore off. I knew if I didn’t get them into some gloves, or mittens soon, I would suffer with cold hands for up to fifteen minutes.

Knowing that each minute I spent resetting the line was more dangerous than the last, I worked hard. The only thing that allowed me to keep going was knowing that soon I would be sipping a hot cup of coffee from the thermos I had brought along with me.

With the trap reset, I knew that before I could get to my coffee, I would have to make the dangerous hike of fifty feet or so before I succumbed to the elements.

I was just about 10 feet from shore, when I realized my fight was far from over! I heard the sound of the flag on the trap popping up. It is a sound only an ice-fisherman knows.  Suddenly I was warm again!

I turned to see the spinner on top of the trap turning wildly in the early morning sun. I could hear the spool playing out line, as the angry fish attacked the defenseless minnow attached to my #6 Eagle Claw Snelled hook.

I raced back to the trap, and got there before the fish completed its run. I took the trap out of the water, careful not to interrupt the flow of line from the spool. I was afraid the fish would take all the line there was before tiring, and simply pull the little shiner off the hook without slowing down.  At last the line slowed, and when it stopped a moment later I set the hook before the line became slack, giving the fish no time to rest!

This time, I could tell the battle would end in my favor! This fish was still tired from our first battle, and while it still fought bravely, the run it made to start the second battle had tired it even more.  The great fish would be mine!

As I pulled in the heavy main line on the reel, I carefully watched for the leader of monofilament line, and when I saw that, I let the fish swim in circles, holding the line in the center of the hole in the ice. I had learned my lesson about letting the line catch on the ice. As soon as the fish slowed, I pulled the line straight up, and pulled a large brook trout from the hole, and left it thrashing on the ice.

I had heard that such creatures existed in this lake, but I never expected to encounter one, and I didn’t expect to catch one either, and most certainly not one of this size! 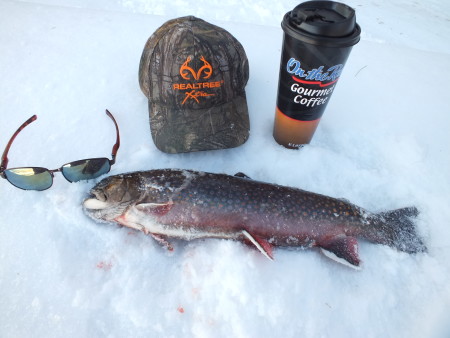 The monster fish was somewhere between twelve, and forty-nine inches long, and weighed somewhere in the neighborhood of one, to seventy-three pounds!

So sleep easy, residents of Etna! Your champion has removed a fresh water demon from you lake! One that most certainly would have swallowed a small dog, or kitten when the strong spring sunshine melts the winter ice.

I promise you, I will return to the spot tomorrow… To again risk my life in an attempt to rid the waters you recreate in of the terrors that lurk in the shallows!

PLEASE BEAR IN MIND THAT ALTHOUGH CURRENT TEMPERATURES HAVE REMAINED BELOW FREEZING FOR THE PAST 24 HOURS OR SO, ICE CONDITIONS ARE VERY POOR!  I WAS LITERALLY FISHING IN SHALLOW WATER NO MORE THAN TWO FEET DEEP JUST A FEW FEET FROM SHORE.  PLEASE EXERCISE EXTREME CAUTION IF YOU DECIDE TO GO FISHING OVER THE NEXT WEEK OR SO!